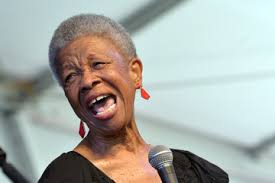 Germaine Bazzle is one of the true jazz legends of New Orleans where she is known as the “First Lady of Jazz”. Ms. Bazzle was this year’s winner of the Lifetime Achievement in Music Education @ OffBeatMagazine’s business awards. She has also Ms. Bazzle received the Big Easy Award for Best Female Performer four times (’90, ’92, ’93, and ‘94). Preferring her work as a teacher, primarily of young girls in choir and music appreciation, she has been under-recognized nationally and internationally through her entire career. Having begun her jazz career as a bassist, her knowledge and feel of the music makes her one of the most sought after New Orleans contemporary jazz vocalists. It’s in her sense of timing, her scatting, her range, her swing, her blood. Influenced by Sarah Vaughan, Ella Fitzgerald, and Billy Eckstein, she took on a repertoire of classic jazz, American popular songs, show tunes, and the music of Duke Ellington. Her exploits singing in the Seventh Ward are unmatched. She has appeared mostly in compilations with many jazz greats and local legends. The album “Standing Ovation” was released under her own name, and she led her own band “Germaine Bazzle & Friends.”