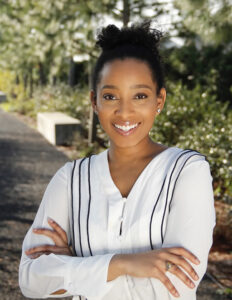 Joel Dyson, a native New Orleanian, received her Bachelor of Vocal Performance from Eastman School of Music. Her love for music led her to study at Louis “Satchmo” Armstrong Jazz Camp at the age of eight, where she studied with Germain Bazzle and Edward “Kidd” Jordan. Since then, Dyson has appeared in a vast array of performances and venues, representing global cultures and prestige, such as the New Orleans Opera Association, the John F. Kennedy Center for the Performing Arts, and her role as Ti Moune in the Tony Award Broadway production, “Once on this Island”. Dyson has opened for John Legend, and has toured the breadth of the northeastern region of North America and Canada with Ivan Neville and George Porter Jr.

Dyson continues to carry the torch through performance and education as the founder of Beyond the Stage LLC.