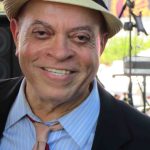 In a career that spans more than fifty years, Deacon John Moore has endured as one of New Orleans’ most talented and adaptive performers. A warhorse and model showman, Moore has entertained generations of New Orleanians, playing classic rhythm and blues, rock ‘n’ roll, blues, jazz and gospel. Blessed with a great voice that was trained in the church, he began singing with his first R&B band in the seventh grade. Moore taught himself to play the guitar from the records and books he purchased. He began playing professionally in 1957 while still in high school. By the 1960’s, Deason was playing in recording sessions with Allen Toussaint, Dave Bartholomew, Harold Battiste, Wardell Quezergue and Eddie Bo. He became one of the city’s most sought after musicians and was a frequent guitarist at Cosimo Matassa’s studio, one of New Orleans’ most popular and dynamic recording facilities during its time. Deacon and his band were the first rock ‘n’ roll musicians to play with the New Orleans Symphony in 1970 and has performed at every New Orleans Jazz and Heritage Festival since its inception.

Moore has grace the covers of many local and national newspapers and magazines. He has appeared in movies, live musical theater, and has been featured in national TV commercials, including Lincoln Cars, Southern Comfort Whiskey, Snickers Candy, Blue Cross health insurance, Capital One Bank (“What’s in your wallet?”), Peoples Health Insurance and AirBNB.

He is an authority in New Orleans music history and culture and has been in many documentaries and promotional campaigns that showcased the city’s heritages. Moore’s accomplishments and popularity has been recognized in his own documentary movie entitled “Going Back to New Orleans: The Deacon John Film” that included a live concert DDVD and CD entitled “Deacon John’s Jump Blues”.

He has been inducted into the Louisiana Blues Hall of Fame; named Gambit’s Best Male Performer, Best Rhythm and Blues Artist and Entertainer in 2003 and was awarded Album of the Year, Overall Band of the Year and Best R&B/Funk/Soul Band by Offbeat Magazine that same year. He has been honored by a myriad of media, arts, cultural and music entities. The United States Postal Service and the New Orleans Jazz and Heritage Foundation honored him with a commemorative envelope, a program that has honored the likes of the Neville Brothers, Ellis Marsalis, Allen Toussaint and other New Orleans music icons.

Moore has performed for President George W. Bush, Governor Bobby Jindal and Mayor Mitch Landrieu. He is the first African American to be elected president of the New Orleans Musicians Union, Local#174-496. He works tirelessly to support the musicians and has spent his entire life contributing to the perpetuation of New Orleans’ great cultural legacy.

The New Orleans Arts &amp; Cultural Host Committee is delighted to present the 2016 Jazz Pioneer Award to a consummate artist and human being, Deacon John Moore, in acknowledgement of his many achievements and contributions that serve to enrich the people and heritage of New Orleans.