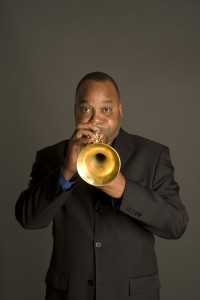 If anyone can pull off aligning himself with the famous Louis Armstrong it’s trumpet extraordinaire – James Andrews. However bold this move may be, the New Orleans native earned the “Satchmo of the Ghetto” alias back in his Treme’ neighborhood and the name still sizzles in the city!!! He’s come up through a variety of brass bands (Treme Brass Band, New Birth Brass Band) before forming his own. He has played with Quincy Jones, Dizzy Gillespie, Danny Barker, Dr. John and Michelle Shocked. A protégé of soul man Allen Toussaint, Andrews has taken his place alongside of contemporaries swinging the New Orleans tradition in contemporary ways. Andrews is the real thing and there’s no novelty in his chops. James Andrews, trumpeter, vocalist, aka “12”, aka “Satchmo of the Ghetto”, is grandson of the late Jessie “Ooh-Poo-Pah-Doo” Hill; is older brother to Troy Andrews (aka “Trombone Shorty”) and is determine to keep the flame of New Orleans Soul and R&B alive and burning in the hearts of many.

In Andrews’ new album…The Big Time Stuff!!!…You can hear, feel, smell, and taste New Orleans throughout this recording. Andrews wanted to “put a new twist on New Orleans Soul and flavor”. The title cut was inspired by Andrews’ “wanting all the best things in life.” It’s funky, it’s comical, it’s bold, it flavorful…just like New Orleans! The center cut “Night Life” inspired Andrews while being a “tourist in his own town” and taking in all of the excitement that the night life of New Orleans has to offer.

Inspiration for the song “I Bet You a Dollar” came from memories of James Andrews growing up in the French Quarter tap dancin‟ and shinin‟ shoes in front of the 544 Club on Bourbon Street…”At the JazzFest” of course, spins from going to the New Orleans Jazz and Heritage Festival and seeing all the happy people, eating all the great foods, and just laissez les bon temps rouler!!!

The finale on this one,”Ghetto Funk Music,” infuses the majestic styles of the Big Chief Monk
Boudreau. A joint that‟s sure to “funk” you right up out of your seat.

The songs on this new disc promise to be at least two things: instant classics and new standards.

His recent appearances in HBO’s “Treme” last season sparked a fire that rekindled the hearts of many and kept the spirit of New Orleans alive throughout the world over with his own rendition of “Ooh-poopah- Doo”.